AniMoby recently released a video showing the step-by-step process of how to use their app with Google Maps.

AniMoby for Android tablets recently combined their features with Google Maps to help travelers stay on the right route. Access to Google Maps is now possible from within AniMoby, where users can add voice and design features. This allows for more thorough explanations of route details, adding a personalized experience to giving directions. 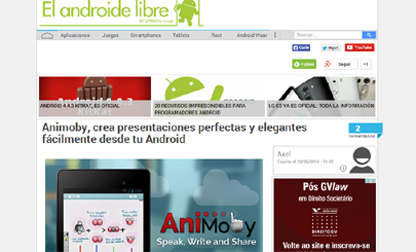 One of the top European app review sites, El Android Libre, recently gave high praise to AniMoby Interactive Whiteboard in a detailed report about the app.

El Android Libre is composed of numerous technology-oriented analyists and journalists, and is based in Madrid. Thus, the article's text is only in Spanish. However, a basic translation of an excerpt follows below:

"This application lets you create interactive presentations from your smartphone or tablet. Specifically, we can record the screen and audio while performing an explanation, using our screen as a blackboard on a blank canvas or on a PDF document... the uses are endless and obvious at once." - El Android Libre

El Android Libre has been providing Android-related news since 2009 and has won several awards within their industry.

Receiving praise in the blogospheres is nothing new to AniMoby, as numerous blogs have put the spotlight on AniMoby's benefits to the world of education. To date, AniMoby has nearly 50,000 total downloads; a number that is growing each day.

Click on the links to download AniMoby for Android tablet, iPad, and iPhone.
Click here to read article in-full (in Spanish) on the El Android Libre site.
Posted by Animoby at 9:18 AM No comments: